As most of you know, I was diagnosed with Crohn's Disease last summer. I have been on an emotional and physical roller coaster ever since.
I get asked a lot, "What is that?" To which a timid Heidi that I didn't know existed replies with something to the effect of, "It's an autoimmune disease that causes inflammation". The following are responses that I have actually gotten after telling someone I have Crohn's Disease;
"I don't know what that is, but I have something similar"
"Oh I know all about that because my friend's cousin has that or something close to it"
"I don't know what that is, but I hope you get cured soon"
"There's a special diet for that"
"Is that what's causing your weight gain?"
"It can't be that bad, you don't look sick"
I have nothing against those responses, they have helped make something very clear- there is very little awareness for this disease. I at one point have probably said something very similar to a fellow sufferer.
Allow me to give you some facts about this disease:
1) Crohn's causes rapid production of white blood cells (antibodies) which then results in your body attacking itself as though you were one big infection.
2) Crohn's Disease can affect both intestines, the colon, joints, eyes, and mouth.
3) Crohn's is chronic, so sufferers will have it for their lifetime.
4) Between 70-90% of sufferers will need to have surgery.
I am not usually honest with people who ask me about my disease. I feel like I am protecting them. "Who would really want to know about that" I ask myself. The problem with that, is I have become more and more isolated with that line of thought. Well I have to LIVE with it. Why shouldn't I tell people who ask?
Before I started my road to remission (haha!), my every day life consisted of waking up with horrible stomach pain, and having a very painful bowel movement first thing in the morning. After every meal I either had to run to the bathroom or crawl depending on my pain level. It felt like someone was scraping my insides over and over with a knife and occasionally stabbing. There was blood in almost all of my bowel movements- which was sometimes as frequent as 12 times a day (aren't you glad you decided to read this?!), and I had debilitating exhaustion/fatigue. My joints ached and I was on edge a lot. I'm considered a "mild" case. Please hug someone who says they have moderate or severe.
After the diagnosis I began the unfortunate roller coaster of medication and side effects as I had now become an experiment. I have been on medications that cause horrible acne (when I have never in my life had to deal with acne before), insomnia, weight gain, anxiety, suicidal thoughts, even more fatigue (I didn't know that existed!), and the list goes on. I am currently relying on my husband to give me injections every other week into my stomach with a medication that does not work on me, while I'm waiting for insurance to decide if it is worth it for them to try another treatment.
I have read countless blogs and articles written by fellow sufferers that talk about how fitness has changed their life. I don't know how anyone has the energy to workout regularly, but decided I would work out a minimum of 3 times a week for a whole year. I just completed 5 months and 1 week without skipping any workouts, and sometimes doing more. I will finish my year of fitness. I wish I could tell you it has changed my life and I look forward to waking up every morning, but that would make me a huge liar. I fight through the fatigue, I fight through the feeling of being hit by a car.
If this experience has taught me anything, it is this; we as humans are resilient. We are capable of more than we ever imagined. I didn't know I had this much fight in me until I got knocked down... A lot. I am stronger than I know. YOU are stronger than you know. Whatever battle you're fighting, whether it is internal, physical or beyond- you can handle it, and the outcome is worth the struggle. Be gentle with yourself and others, as we cannot know what each of us is going through. If you are feeling alone, please reach out. I'm so glad I did, and I am still here. I don't know everyone who reads this, but I love you, and you are not alone.
If you are interested in hearing someone else's thoughts on chronic illness, please take the 3.5 minutes to watch Hank Green do a spectacular job of articulating what it's like to live with a chronic illness.
https://youtu.be/3krVl6UMIeo 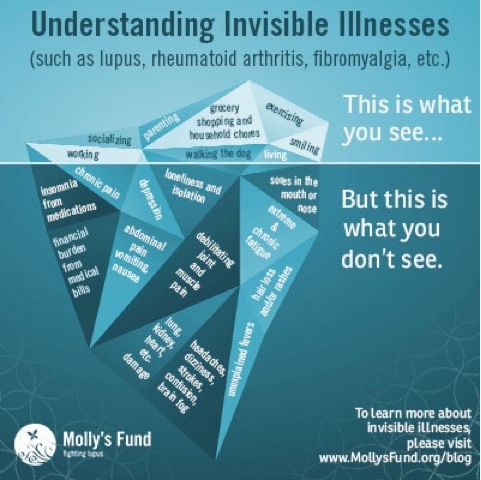